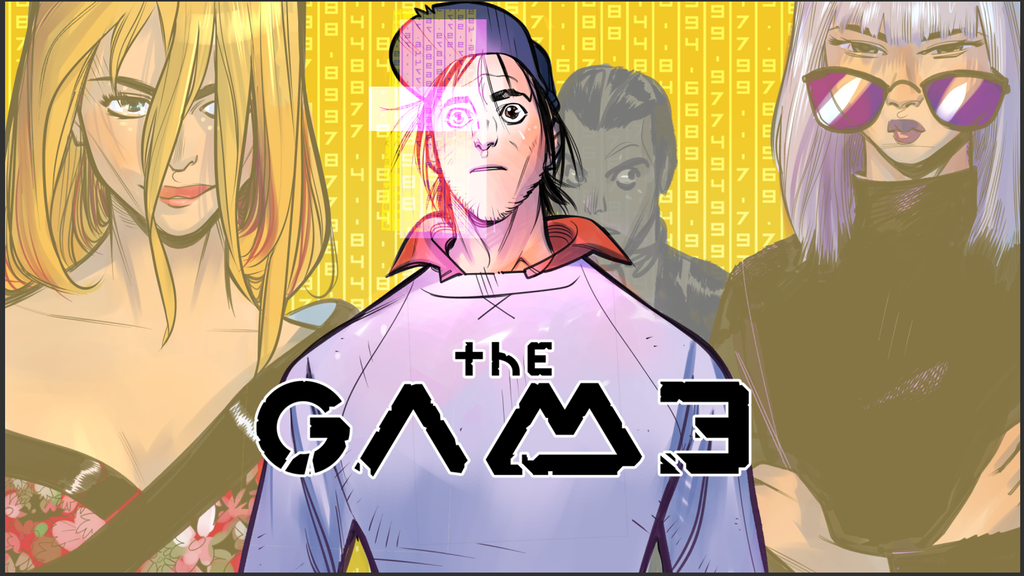 In the game of life, no one's been keeping score... until now. A brand new series from the creators of White Ash. Welcome to THE GAME

Latest Updates from Our Project:

Thank you again for another amazing campaign. The BackerKit surveys should be hitting your inbox this weekend.  If you haven't done a BackerKit survey before, in addition to letting you fill out your mailing address for rewards, they also give you an opportunity to add on a couple of extra items (some of which were not offered as part of the campaign).

If you'd like your name listed in the BACKER'S SECTION of the PDF,  you must fill out your survey by September 16th.  After that, we'll be sending out the PDF's, and once they go, we won't be able to add your name.

If you're going to be moving in the next two months and are worried about rewards going to the wrong address, don't stress, BackerKit has you covered.  Before we begin mailing out the books, BackerKit will send you another email and give you an opportunity to update your location.

We're really excited to get the first issue of The Game  to you.   This campaign was so much fun to put on.  I look forward to bringing some of that interactivity to the next time I launch a project on Kickstarter.  Feel free to DM me if you have any questions as we go forward.  We'll keep you in the loop as comics are printed and shipped.

Thank you for an amazing campaign.   570 people is an incredible start for a new series on Kickstarter.  Building a fanbase for an independent comic isn’t easy and we don’t take that loyalty lightly.  With it comes a responsibility to deliver and rest assured, deliver we will.  To that end I will regularly update you as we move along through production. Here’s a quick snapshot of the next couple of weeks.

Week One — Kickstarter collects fees and backers who may have forgotten that their credit card has expired/was stolen/was maxed out on a custom "Bad Place" Janet Funko, will be given a chance to update it.  PLEASE CHECK and see if you're one of the 22 (currently) backers that have a notification from KS.

Week Three (around the 28th of August) — As soon as Kickstarter has transferred the funds to our account, we’ll send out our BackerKit Surveys. Please fill these out as quickly as possible. We’re looking to do a fast turnaround on The Game, as we’d like to get your PDFs as soon as possible.

Week Five (around Sep 11th) — Once we have all the surveys back and we have a list of backer names  in hand, we’ll be sending out the PDF’s.

By then, we should also have a firm shipping schedule from the printer locked down and have a better sense of when exactly in October we’ll begin shipping the print copies of the books.  We look forward to sharing more info with you as soon as we have it.

Also, we have our first 10 people who have finished our little game within The Game.   But remember, everyone who completes our game and gets the correct answer, will receive an exclusive print.  If you want to check your answer (to make sure it's the right one) you can email us at info@noveldrop.com.  The place to enter that answer will be in the BackerKit survey (in a couple of weeks).

If you have any questions, always feel free to reach out to me here on Kickstarter or find us on the following social networks:

Conor (and sometimes Charlie in chat) streams LIVE ON TWITCH While his schedule is still a little in flux due to a new baby, he likes to be online M-F from 12:30-5pm and sometimes again 10:30pm-1am EST

Thank you again, we’re so excited to get you The Game.

Be in touch very soon,

Thank you so much for taking part in our campaign.  Designing a Game to be played inside The Game has made this an exceedingly fun KS for us to manage.  I look forward to throwing new wrinkles at you in future campaigns for The Game and possibly bringing some of this innovation to White Ash.

As I write this there are a little over 30 hours left.  We are very close to unlocking the textured art print stretch goal... but still a ways from...

Stretch Goal Number 3:  One plus One is... Two  In which every physical backer would also get a PDF of The Game #2.  I bring this up not to tease, but to encourage.  Plus we may revisit this down the road.  But for now, it's time to drop THE FINAL CLUE!!!

Clue #1 -- directions are on the KS page about how to get it.  Though if you search our twitter feeds, you may be able to find it there too.

Clue #3 -- Will be hanging ten with a certain metallic shark (check the updates).

Clue #4 -- Is marching off to battle with a group of expectant warriors (check the updates).

Clue #5 -- is rocking out at the Crossroads (check the updates).

CLUE # 7 Do That Voodoo That You Do So Well. (check the updates).

(HINT#1) -- The Kickstarter page will point the way.

CLUE # 9 -- Time to go to school.  Watch yourself some Comics Creator Club.

Hey Players, Charlie here.  The American comic book industry has always been centered in New York.  But in the mid-80's that focus shifted slightly northwards as the black and white independent explosion was lead by a familiar quartet of turtles. And as a comic book lover growing up in Maine and NH in the late 80's, I couldn't have been more proud of what Eastman and Laird were doing.  The popularity of TMNT made so many of us feel that a creator-owned success was possible.  The rise from an obscure, small print-run comic, to a multi-media and toy-line giant... it's the stuff of legends.  And it's what I wager a good number of people here on Kickstarter aspire to.

But what happens when that crazy ride comes to an end?  That's the story that Eastman, David Avallone and Ben Bishop are telling in DRAWING BLOOD.

I'm going to take off my professional coat and put on my fanboy hat for a second and tell you I am SO excited about this book.  And it's not just because of an amazing story that taps into the core of my childhood.  It's also about the co-creators on the comic. I've been on a couple of panels at SDCC and WonderCon with David Avallone. Besides being incredibly kind, he's is one of the funniest people I've met in person.  He writes a slew of books for Dynamite including Bettie Page, The Shadow, and Vampirella.  I can't wait to read what he's done.

And then there's Ben Bishop.  For me, just fact that he's another comic book creator from Maine would be enough.  But for the rest of you, Bishop picked up the New England independent creator mantel from Eastman and has been self-publishing innovative comics (like Aggregate and Nathan the Caveman) that push the boundaries of the medium for over a decade.  Together they make a creator team that's doing a story that everyone on Kickstarter should be checking out.

Need more incentive.  There's a VERY GOOD chance you can find the FINAL CLUE for The Game somewhere in their project update.

Thanks again everyone for spreading the word about The Game.  As I said before, this has been an incredibly fun campaign.  Thanks for coming along with us.  We really couldn't do any of this without you.

All the very best,

A couple of you have completed our game (even without the final clue) and think you have the "answer."

If you do, please email us at info@noveldrop.com and let us know what you think it is.  The first ten with the right answer will be entered in to a drawing for a piece of original art from Conor Hughes.

Note: The "answer" if you've correctly solved the puzzle should be very clear.  (Like a big bombastic message from the heavens) If you're unsure if you have it, you probably don't.

If you don't end up being one of our first ten finishers, that's okay too.  When you fill out your Backer Kit survey, there will be a chance to enter your answer.  Everyone who enters the right one, will get an exclusive, limited edition print.

We really hope you've enjoyed playing and supporting The Game.

There was a bit of a technical glitch for the latest episode of Comics Creators Club.  As such, The Game Clue is probably not going to be in the episode with Kevin Cuffe, Bob Frantz, Josh Hood.  However, if you go to the CCC youtube channel, you should be able to find it pretty easily.

Clue or no clue I'd still suggest watching the episode with Kevin, Bob and Josh.  Knowing those three, it's going to be a lot of fun.  And if you haven't had a chance to check out their campaign for the hilarious Metal Shark Bro, it's still a little ways from funding and could use a little more love.

Thanks again and enjoy the rest of the weekend.